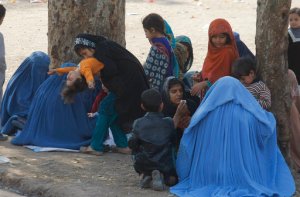 Afghan refugee families sit outside the government registration office preparing to leave for their homeland, in Peshawar, Pakistan, Tuesday, March 14, 2017. The closure of the border between Pakistan and Afghanistan, blamed on deteriorating relations, is more than inconvenient, it is costly. Officials on both sides of the border say in just one month the closure has resulted in hundreds of thousands of dollars in lost trade and tons of perishable goods have rotted in stranded trucks. (AP Photo/Muhammad Sajjad)

PESHAWAR, Pakistan (AP) — The closure of the border between Pakistan and Afghanistan is more than inconvenient; it is costly.

Officials on both sides of the border say in just one month, the closure has resulted in hundreds of thousands of dollars in lost trade, and tons of perishable goods have rotted in stranded trucks.

The two countries accuse the other of harboring their militant enemies. Both countries deny the other’s charges. This longstanding tension reached a breaking point when Pakistan closed all border crossings on Feb. 16 after a string of brutal suicide attacks last month that killed more than 125 people. Islamabad claims the attacks were orchestrated from safe havens in Afghanistan.

Kabul too has been battered by horrific attacks, the latest a coordinated assault against a military hospital that killed more than 30 people.

Afghanistan’s ambassador to Pakistan Omar Zakhilwal has asked Pakistan’s political leadership to reconsider the closure. Pakistan recently agreed, but only for two days to allow an estimated 35,000 stranded Afghans and Pakistanis to return to their homes. Families on both sides of the border share relationships and cultural roots.

Border traffic routinely gets disrupted, sometimes to protest against U.S. action in the region, but the closures are rarely protracted. The one exception __ and only for trucks carrying goods destined for NATO soldiers __ occurred in 2011 when Pakistan protested a U.S. attack on a Pakistani military outpost that killed 24 Pakistani soldiers. The closure lasted seven months.

Otherwise, lengthy border closures lasting more than a week or two are rare.

Aside from the political back-and-forth and personal inconveniences, this closure is hurting business in the region. The border is one of the most lucrative trade crossings in South Asia. Cross-border trade includes everything from supplies destined for NATO troops still stationed in Afghanistan to Afghan goods transiting through Pakistan to the Arabian Sea port of Karachi destined for international markets, said senior Pakistani customs officer Samad Khan.

Ziaul Haq Sarhadi, senior vice president of the Afghanistan/Pakistan Joint Chamber of Commerce, said the annual trade target of $2 billion dollars has plunged to $1.5 billion because of frequent border closures. The real potential, if the two neighbors could get along, is up to $4 billion in annual trade, Sarhadi said.

“We understand the sensitivities,” Sarhadi said in a telephone interview, referring to border security. However the closures are already creating shortages of goods in Afghanistan.

“Afghanistan depends on Pakistan for everything from needles to helicopters,” he said. Some of the Afghan members of Sarhadi’s organization called the closure both illegal and illogical.

The two countries share a 2,400-kilometer (1,500-mile) border known as the Durand Line — named for Sir Henry Mortimer Durand, the former British diplomat who first established the border in 1896. The two countries routinely squabble over the border, at times escalating into armed conflict. Earlier this month, former Afghan President Hamid Karzai said that Afghanistan would never accept the Durand Line as an international border, stoking fears on the Pakistani side.

The bulk of the trade between the two countries is construction material, meat, poultry, fresh and dry fruits. And the real victims, Sarhadi said, are the small traders for whom a truckload or two that spoils while waiting at the border could be devastating.

Since last month’s decision, more than 2,000 trucks have been stranded at the Torkham crossing on Afghanistan’s northwest border. The prolonged closure “has affected us badly,” said Lal Raheem Shinwari, president of the Traders Association in the nearby Pakistani town of Landi Kotal. “We, the residents and traders, are the worst affected.”

The Pakistani government won’t say when the border might re-open. Each country has given the other a list of militants they want apprehended and handed over. Afghanistan has also identified 23 insurgent sanctuaries in Pakistan that it wants closed.

In Kabul, Azrakhsh Hafizi, a member of the international relations committee of the Afghan Chamber of Commerce, said the two countries need a regional cooperation agreement. Politics, he said, is devastating the business communities in both nations. In the markets in Kabul, prices are already soaring, Hafizi said.

“All the time we are facing many many challenges because of politics,” he said. “The business community suffers a lot of losses and a lot of problems. We need to find a solution to this.”

Faiez reported from Kabul, Afghanistan.
Copyright 2017 The Associated Press. All rights reserved. This material may not be published, broadcast, rewritten or redistributed.