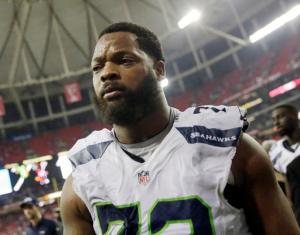 FILE – In this Jan. 14, 2017, file photo, Seattle Seahawks defensive end Michael Bennett (72) walks off the field after an NFL football divisional football game against the Atlanta Falcons, in Atlanta. In an embarrassment to the Israeli government, only five of 11 NFL players have arrived on a sponsored trip aimed at improving the country’s image. The ministry for strategic affairs and public diplomacy issued a press release after the Super Bowl boasting that the visit would bring “influencers” who would serve as “goodwill ambassadors” when they returned home. The announcement led Seahawks Michael Bennett to pull out. He accused the government of trying to use him for PR purposes and cited sympathy for the Palestinians. Several others players followed suit. (AP Photo/David Goldman, File)

JERUSALEM (AP) — It was supposed to be a feel-good visit by a group of professional football players to give a boost to image-conscious Israel.

But in an embarrassing fumble by the Israeli government, only five of 11 NFL players in the delegation showed up after being blitzed by Palestinian activists opposed to the visit.

Israel’s ministry for strategic affairs and public diplomacy issued a press release after the Super Bowl boasting that the visit would bring “influencers” who would serve as “goodwill ambassadors” when they returned home.

The announcement led Seattle Seahawks defense lineman Michael Bennett to pull out. In a lengthy Twitter post, he accused the government of trying to use him for PR purposes and cited sympathy for the Palestinians.

“I will not be used in such a manner,” he wrote, adding that he still intends to visit Israel, but only on a trip that includes stops in the West Bank and Gaza Strip to meet Palestinians.

Citing the example of Muhammad Ali, and the late boxing legend’s support for the Palestinians, Bennett said he too wants to be a “voice for the voiceless.”

“I cannot do that by going on this kind of trip to Israel,” he said.

Several others players followed suit, and at the delegation’s first official stop on Tuesday at Rambam Hospital in Haifa, only five players were present, said hospital spokesman David Ratner. He said the players were given a tour of the hospital and shown a presentation of a device developed by one of Rambam’s researchers that detects concussions in real time.

Public Diplomacy Minister Gilad Erdan, whose office spearheaded the visit, had enthusiastically promoted it, saying the NFL players would help boost Israel’s image and counter the influence of an international boycott movement.

“I hope that, through their visit, they will get a balanced picture of Israel, the opposite from the false incitement campaign that is being waged against Israel around the world,” he said. “I hope that the players will present the beautiful face of Israel to their tens of millions of fans in the United States.”

But since Bennett’s post on Saturday, the ministry has gone silent. After promising various updates on the delegation, Revital Yakin-Karkovsky, the executive director for communications and strategy in the ministry, said Wednesday it would not comment on the visit. The Tourism Ministry and the nonprofit America’s Voices in Israel organization, which were also involved in the planning, have also distanced themselves.

The five players who did make the trip — Delanie Walker of the Tennessee Titans, Mychal Kendricks of the Philadelphia Eagles, Cameron Jordan of the New Orleans Saints, Calais Campbell of the Arizona Cardinals and Dan Williams of the Oakland Raiders — have also noticeably kept quiet on social media.

The only evidence of the visit is an Instagram video of Kendricks from a local restaurant, where he sings along to Marvin Gaye’s “Let’s get it on” and asks locals to say hello to the camera in Hebrew.

An open letter published in The Nation that was signed by pro-Palestinian activists and supporters such as Harry Belafonte, Danny Glover and Alice Walker had urged the players to skip the trip.

“The Israeli government sought to use these NFL players, who have tremendous platforms due to their popularity, in an effort to whitewash Israel’s ongoing denial of Palestinian rights,” said Yousef Munayyer, director of the U.S. Campaign for Palestinian Rights, who initiated the open letter. “It was heartening to see so many players choose not to sit on the sidelines but instead to stand on the right side of history.”