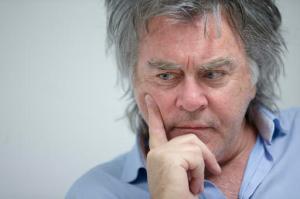 FILE – In this Feb. 19, 2016, file photo, Hillsboro, Ohio, Mayor Drew Hastings, who is a veteran standup comedian, pauses during an interview at his office in Hillsboro, Ohio. A final pretrial hearing is planned Wednesday, Oct. 12, 2016, for Hastings, whose trial on four felony counts alleging misconduct in office is scheduled to begin Nov. 7. (AP Photo/John Minchillo, File)

HILLSBORO, Ohio (AP) — A prosecutor says a standup comedian who’s appeared on late-night TV abused his power as mayor of an Ohio city, while the defense blames a political vendetta for the charges against him.

The Times-Gazette (http://bit.ly/2flyt94 ) reports a special prosecutor from Ohio’s auditor’s office told jurors Tuesday that Hastings “thought the laws didn’t apply to him.”

A defense attorney says Hastings’ political enemies were behind an investigation that began soon after his re-election to a second term last November, “as though a bell sounded.”