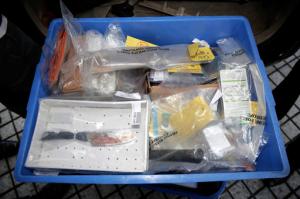 Police display pieces of evidence used to convict British banker Rurik Jutting of murder in the High Court, Tuesday, Nov. 8, 2016, in Hong Kong. Jutting was convicted of murder Tuesday for killing two Indonesian women in Hong Kong, torturing one of them over three days while using cocaine in a gruesome case that shocked the Chinese financial hub. (AP Photo/Kin Cheung)

HONG KONG (AP) — A British banker was convicted of murder Tuesday, Nov.8, for killing two Indonesian women in Hong Kong, torturing one of them over three days while using cocaine in a gruesome case that shocked the Chinese financial hub.

The nine-person jury returned unanimous verdicts against Rurik Jutting after a two-week trial in the High Court. The slayings in 2014 and disclosures as the case developed highlighted Hong Kong’s significant inequality as well as the decadent lifestyles of some members of the former British colony’s expatriate elite.

Jutting bowed his head briefly as the verdicts were read out to a packed courtroom but otherwise showed little reaction. He was given an automatic mandatory life sentence.

While he has the right to an appeal, his defense lawyer indicated ahead of the verdict that Jutting would request a transfer to a British prison to serve out his sentence there.

In a statement his lawyer asked to be read into the court record, Jutting said he was sorry and accepted the verdicts as “just and appropriate punishment.” He also said he was haunted by his actions and the pain he’d caused to the women’s loved ones.

Jutting, a Cambridge University graduate who worked for Bank of America-Merrill Lynch, was convicted of killing 23-year-old Sumarti Ningsih and then killing 26-year-old Seneng Mujiasih days later. The two originally came to Hong Kong as foreign maids but ended up as sex workers.

As statements from their families were read out by the prosecutor, Jutting stared at the floor.

Jurors were shown graphic smartphone video clips taken by Jutting of his apparent torture of Sumarti, which the judge deemed too graphic for the public to view. He slit her throat and then nearly decapitated her when she didn’t die immediately, according to facts agreed upon by both the prosecution and defense. He then stuffed her body inside a suitcase that he left on the balcony of his upscale apartment near Hong Kong’s famous Wan Chai red-light district.

Jutting had planned to torture Mujiasih with about $900 worth of tools and sex toys he had bought hours before. But he killed her when she spotted a gag in his apartment and wouldn’t stop screaming, according to the two sides.

After the verdict, Judge Michael Stuart-Moore called the case “one of the most horrifying murder cases to come to the courts in Hong Kong.”

“There are insufficient superlatives to describe the cruelty” that Jutting inflicted on Ningsih and planned for Mujiasih, he said, adding that the defendant had not shown “one shred of remorse” and rejected his apology.

He called Jutting an “archetypal sexual predator” and cited testimony from an expert psychiatric witness who said Jutting would be prone to committing sexual violence again.

The judge said his sentencing remarks were aimed at notifying authorities in Britain, who must hold their own sentencing hearing if his transfer is granted, of the “immense danger” Jutting poses if he is allowed out of prison.

Ningsih’s brother, Suyit Khaliman, said the family welcomed the verdict and was grateful that Jutting was given the maximum penalty under Hong Kong law.

“Justice finally has been upheld after two years,” Khaliman said. “The sentence is still incomparable to the pain that is felt by us who lost Ningsih in such a terrible way.”

Khaliman said the family, from Central Java province, has suffered financially and emotionally since the death of Ningsih, who has a son, now aged 7.