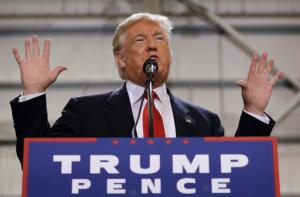 WASHINGTON (AP) — The Latest on the U.S. presidential election (all times EDT):

Former Republican senator John Warner is panning Donald Trump as disrespectful of the military and woefully unprepared to be commander in chief.

Warner is a five-term Virginia senator, veteran and former Secretary of the Navy. He was appearing with Hillary Clinton’s running mate, Tim Kaine, in Virginia to endorse the Democratic ticket.

Warner said he’s weighing in because he’s “distressed” by Trump’s comments that the military is in bad shape. He said Clinton is deeply prepared to be president, citing their time together on the Senate Armed Services Committee.

He said above all, Clinton is respectful of the military. He added: “That’s one word that’s totally lacking on the other side.”

Kaine and Warner warmly recalled their friendship. Warner is a friend of Kaine’s father-in-law, former Republican Virginia Gov. Linwood Holton. Warner said he first appeared on behalf of Kaine when Kaine ran for the Richmond city council decades ago.

Kaine told the crowd that he called Warner for advice when deciding to run for Senate in 2012. He’s praising Warner as a politician who has “always put country and commonwealth above everything else.”

Obama was speaking in an interview with radio host Steve Harvey airing Wednesday. He said he’s been frustrated at people’s reluctance to give Clinton credit. He said it’s partially because “she’s been around a long time” and possibly because there hasn’t been a female president before.

Obama said his legacy is on the ballot this year. He said everything his administration has accomplished in the last eight years is at stake.

The president said Trump “basically admitted” in the first debate that he didn’t pay taxes. He said Trump admitted he didn’t pay people who worked for him. Obama accused Trump of insulting women during and after the debate.

Hillary Clinton is trying to build on her widely praised debate performance by making a direct appeal to younger voters.

Clinton is campaigning Wednesday in New Hampshire with Bernie Sanders. It’s their first joint campaign appearance since their “unity” rally after Sanders endorsed Clinton. She’s struggled to win over the young voters whose enthusiasm drove his primary campaign.

Donald Trump is claiming that the debate was a success for him, too. His campaign is celebrating what it says is about $18 million Republicans raised in the day after the debate.

Trump is campaigning in Illinois, Iowa and Wisconsin.

Clinton’s campaign is also dispatching Michelle Obama to campaign for her in Pennsylvania. The first lady has been one of the most effective campaigners for Democrats this year.

Donald Trump is refusing to release his tax returns. But he has turned them over when he stood to make a profit, needed a loan or when a judge forced him.

No one who’s seen those documents is allowed to say what’s in them.

In all the cases reviewed by The Associated Press, each person, organization, company or government office that has seen copies of Trump’s tax returns is barred from discussing their contents. That leaves the public with only glimpses into what his tax returns contain.

Trump faces increased criticism from Democrat Hillary Clinton to release his tax returns after he said during the presidential debate that he was smart for not paying federal income taxes in some years. Since 1976, every major party nominee has released their returns.
Copyright 2016 The Associated Press. All rights reserved. This material may not be published, broadcast, rewritten or redistributed.