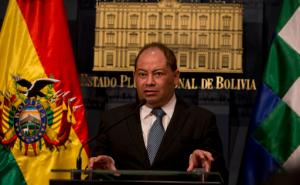 Bolivia’s Government Minister Carlos Romero speaks during a press conference at the government palace in La Paz, Bolivia, Thursday, Aug. 25, 2016. Striking informal miners in Bolivia kidnapped and beat to death the country’s deputy government minister after he traveled to the area to mediate in the bitter conflict over mining laws, officials said late Thursday. Romero called it a “cowardly and brutal killing” and asked that the miners turn over the body of deputy minister Rodolfo Illanes. (AP Photo/Juan Karita)

LA PAZ, Bolivia (AP) — Striking informal miners in Bolivia kidnapped and beat to death the country’s deputy interior minister on Thursday, Aug. 25, after he traveled to the area to mediate in the bitter conflict over mining laws, officials said.

Government Minister Carlos Romero called it a “cowardly and brutal killing” and asked that the miners turn over the body of his deputy, Rodolfo Illanes, who holds the formal title of vice minister of the interior regime.

Earlier, Romero had said that Illanes had been kidnapped and possibly tortured, but that he could not confirm local media reports that he had been killed by the striking miners, who are demanding more rights, including the right to associate with private companies.

The fatal beating follows the killings of two protesters in clashes with police, deaths that likely escalated tensions in the strike.

Illanes had gone to Panduro, 80 miles (130 kilometers) south of the La Paz, where the strikers have blockaded a highway since Monday, to open a dialogue. Thousands of passengers and vehicles are stranded on roads blocked by the strikers.

At midday Thursday, Illanes said on his Twitter account: “My health is fine, my family can be calm.” There are reports the Illanes had heart problems.

Bolivia’s informal or artisan miners number about 100,000 and work in self-managed cooperatives. They want to be able to associate with private companies, which is prohibited. The government argues that if they associate with multinational companies they would cease to be cooperatives.

The National Federation of Mining Cooperatives of Bolivia, once strong allies of President Evo Morales, went on an indefinite protest after negotiations over the mining legislation failed.
Copyright 2016 The Associated Press. All rights reserved. This material may not be published, broadcast, rewritten or redistributed.