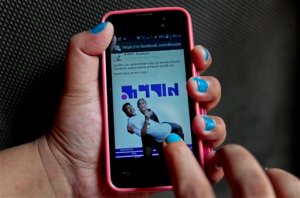 The Facebook page of Roopbaan magazine, a LGTB rights publication, is seen on the screen of a cell phone in Dhaka, Bangladesh, Thursday, April 28, 2016. The killing of two gay rights activists in the Bangladeshi capital has driven the country’s already secretive and small gay community underground, wondering if they can trust a government that considers their status to be criminal, rights groups said. (AP Photo)

NEW DELHI (AP) — The killing of two gay rights activists in the Bangladeshi capital has driven the country’s already secretive and small gay community underground, wondering if they can trust a government that considers their status to be criminal, rights groups said.

Police detectives say they are working with evidence including a mobile phone, documents and witness testimony to solve the case, in which a gang of young men fatally stabbed a theater actor and the editor of Bangladesh’s only LGBT rights magazine, who also worked for the U.S. Agency for International Development.

But with these being the latest killings in an ongoing wave of violence targeting atheist writers and outspoken moderates, members of Bangladesh’s minority groups and civil society worry they’re not safe, while rights groups question the government’s repeated claims that the situation is under control.

That fear is especially strong among members of Bangladesh’s largely closeted gay community.

“They have gone into hiding. They are feeling particularly vulnerable,” said Meenakshi Ganguly of Human Rights Watch. “Being gay is hard enough in conservative societies.”

After the government advised those at risk to simply lay low and avoid offending others, she said, “LGBT people are hardly likely to have faith in a government that pretty much denies the LGBT community exists.”

Already, five people have been killed this year, after nine were slain in 2015. But while authorities have arrested suspects in some of those cases — mostly low-level operatives following orders in allegedly carrying out the attacks — none has yet been prosecuted, and authorities have yet to identify the masterminds. Police say they are waiting until investigations are complete before taking any suspects to court. For the 2013 killing of an atheist blogger, a court has sentenced two men to death and six others to time in prison.

The attacks follow a similar pattern: a group of young men wielding knives or machetes approach their victim as his guard is down, perhaps while he is strolling down the street or relaxing at home. The men spew hateful language, then hack and stab at the victim before disappearing, often without a trace.

Nearly all the attacks have been claimed by transnational Islamist extremist groups, including the so-called Islamic State and various affiliates of al-Qaida.

The government has dismissed these claims of responsibility, saying these groups have no presence in the Muslim-majority nation of 160 million in South Asia. Instead, it says the attacks are part of a campaign by domestic groups aligned with political opposition parties who want to undermine Prime Minister Sheikh Hasina’s secular government and restore Islamic rule. It has yet to publicly present any evidence of such a campaign.

The opposition has denied the allegations, saying they are being scapegoated for Hasina’s failures in maintaining security.

“These attacks are politically motivated, well-planned to destabilize the country,” retired Maj. Gen. Abdur Rashid, a security analyst, told The Associated Press. But that doesn’t mean the effort isn’t coming from abroad or coordinated with international groups, he said. “This is designed to create sense of insecurity among people so they get terrified, and they are succeeding in doing that.”

Responsibility for Monday’s attack was claimed by the AQIS-affiliate Ansar al-Islam, which said its victims were targeted as “pioneers of practicing and promoting homosexuality.”

One of the victims, Xulhaz Mannan, was one of the most prominent gays in Bangladesh as a leading activist and editor of the Roopbaan, a LGBT rights magazine he launched in 2014. Bangladesh outlaws homosexual relations, punishable by up to life in prison.

Mannan had openly described how difficult it is to be gay in Bangladesh. In a 2014 blog entry, he called Bangladesh “a country where the predominant religions identify a same sex lover as a sinner, the law of the land as a criminal; social norms as a pervert; culture as imported — how should life be for LGBTs in Bangladesh?”

With police apparently struggling to prevent more targeted attacks, many members of civil society have become spooked into moving abroad or going underground.

Human rights lawyer and activist Sara Hossain, a friend of Mannan, ridiculed the government’s repeated statement that they have the situation under control.

“If it is so, then why people are being killed in every 24 hours?” she asked.