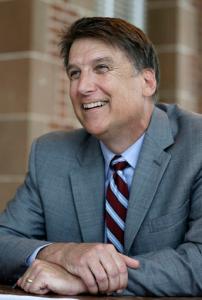 North Carolina Gov. Pat McCrory makes remarks during an interview at the Governor’s mansion in Raleigh, N.C., Tuesday, April 12, 2016. McCrory says he wants to change a new state law that prevents people from suing over discrimination in state court, but he’s not challenging a measure regarding bathroom access for transgender people. (AP Photo/Gerry Broome)

RALEIGH, N.C. (AP) — North Carolina’s governor is asking lawmakers to change part of a state law criticized for its anti-discrimination policies, but he sees no need for a wholesale repeal or reversal of its provisions on transgender bathroom access.

Gov. Pat McCrory issued an executive order on Tuesday, April 12 expanding protections for many state workers based on sexual orientation and gender identity. He also said he will ask the General Assembly in the coming weeks restore the ability of all workers to sue over employment discrimination on the basis of issues like race, age and gender in state court. That ability that had been removed in the law.

“This was my conclusion after hearing from many, many different sides of the issue,” McCrory told The Associated Press shortly after he signed the order.

But aside from the change on workplace discrimination lawsuits, McCrory supports preserving the rest of the law that has brought nationwide fallout to North Carolina since he signed it last month. LGBT rights groups and political opponents have blasted him, while criticism from business executives includes several who have scaled back planned expansions in the state. Bruce Springsteen also canceled a concert in the state because of the law.

North Carolina’s measure is among several advanced across the country that opponents say is discriminatory toward gay, bisexual and transgender people.

McCrory’s order also affirmed parts of the law directing people at government buildings and schools to use the multistall bathrooms corresponding to the sex listed on their birth certificate. And the law still prevents local governments and the state from mandating businesses extend protections to LGBT people who work for them or who visit their stores and restaurants.

The state law still excludes gender identity and sexual orientation as classes explicitly protected from employment and public accommodation. That means people still would not be able to sue in state court over employment discrimination based on those factors, even if lawmakers make the change McCrory is seeking, said ACLU lawyer Chris Brook.

Although some critics of the law called the order a positive first step, the most vocal opponents said nothing short of repeal will be enough.

“The governor’s action is an insufficient response to a terrible, misguided law that continues to harm LGBT people on a daily basis,” said Sarah Warbelow, legal director at the Human Rights Campaign. “It’s absurd that he’ll protect people from being fired but will prohibit them from using the employee restroom consistent with their gender identity.”

A Charlotte ordinance approved in February that would have allowed transgender people to use bathrooms corresponding to their gender identity in public accommodations caused the Republican-controlled General Assembly to hold a special session March 23. Legislators overturned the ordinance and blocked all other cities and counties from passing similar rules against discrimination.

There was no need for a state law “until the city of Charlotte brought it up,” said McCrory, himself the previous mayor of North Carolina’s largest city. “It wasn’t a problem in my 14 years as mayor, and I’ve never heard it as an issue during my three years as governor.”

Attorney General Roy Cooper, a Democrat challenging McCrory for governor this fall, said McCrory should have vetoed the law to begin with and the order doesn’t change that last month’s legislation “has written discrimination into the law.”

A full repeal appears highly unlikely. In statements, Republican legislative leaders didn’t address McCrory’s request to restore the right to sue in state court for employment discrimination. But they praised him for reaffirming bathroom provisions in the law they say keeps women and children safe from men who may have used ordinances similar to Charlotte’s as a pretense to enter women’s restrooms.
Copyright 2016 The Associated Press. All rights reserved. This material may not be published, broadcast, rewritten or redistributed.