The foxes on islands lying just off the state’s southern coast were once on the brink of extinction.

Four fox subspecies that live on San Miguel, Santa Rosa, Santa Cruz and Santa Catalina islands were placed on the endangered species list in 2004. Disease and predators had dramatically reduced their populations.

Golden eagles that migrated to San Miguel and Santa Rosa devoured the foxes, leaving only around 15 on each island by 2000. The number of foxes on Santa Cruz Island dipped to a low of 62 in 2002.

The golden eagles were able to spread to the islands because the islands’ native bald eagles, which didn’t prey on foxes, were wiped out there 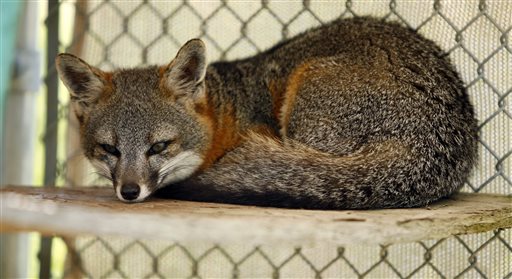 FILE – This June 9, 2006 file photo shows an endangered island fox in a National Park Service captive-breeding facility on Santa Rosa Island in the Channel Islands National Park off the coast of Southern California. Native foxes on islands off the California coast were once on the brink of extinction. But after decades of effort to save them, the island fox is now thriving, officials say. The U.S. Fish and Wildlife Service is expected to make a major announcement about fox Friday, Feb. 12, 2016.(AP Photo/Damian Dovarganes, File)

by the discharge of the now-banned chemical DDT into coastal waters.

Wildlife officials and biologists crafted a plan that included relocating the non-native golden eagles from the northern Channel Islands, killing off Santa Cruz’s huge population of feral pigs that lured golden eagles, reintroduction of bald eagles, vaccinating the foxes against canine distemper and breeding the foxes in captivity.

Officials said Friday the fox populations have now recovered to self-sustaining levels. The U.S. Fish and Wildlife Service is calling their resurgence the fastest successful recovery of any mammal listed under the Endangered Species Act.

As of last year, there were 520 native foxes on San Miguel and 874 on Santa Rosa, according to the group Friends of the Island Fox. The number of foxes on Santa Cruz Island had risen to 1,750.

“It was a challenge but one of the nice things is we were separated by ocean so we could control a lot of the potential impact,” Galipeau said.

On Santa Catalina, canine distemper brought over from the mainland reduced the fox population to 103 in 2000, but last year it was 1,717.

Officials are recommending native foxes on Santa Catalina island be reclassified from endangered to threatened, saying the potential for disease outbreak is a remaining threat.

Tierra Curry, senior scientist at the Center for Biological Diversity, credited the Endangered Species Act for saving the island foxes.

“Thanks to its remarkable power, we can celebrate the successful recovery of the island foxes,” Curry said in a statement.

Once the home of Native Americans, the Channel Islands were reached by early European explorers, fur hunters seeking sea otters, seals and sea lions, and then became a base for fishermen, according to the National Park Service.