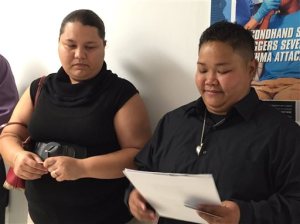 Loretta M. Pangelinan, 28, holds the application for a marriage license that she and her fiancee, Kathleen M. Aguero, 28, will turn in at the Office of Vital Statistics in the Guam Department of Public Health and Social Services on Wedneday, April 8, 2015. Pangelinan and Aguero’s application was refused by the clerk at the department’s Office of Vital Statistics. Under Guam law, a marriage license is only issued to a couple of the opposite sex, department director James Gillan said. R. Todd Thompson, an attorney for Pangelinan and Aguero, said the couple plans to take their case to federal court. (AP Photo/Grace O. Garces Bordallo)

HAGATNA, Guam (AP) — Guam on Wednesday rejected a marriage license application from the first-same sex couple to apply for the document in the U.S. territory.

A Department of Public Health and Social Services clerk refused to accept an application filed by Loretta Pangelinan and Kathleen Aguero.

“It doesn’t mean I’m not sympathetic, but the law is going to prevent me from issuing a marriage license,” department director James Gillan said.

Under Guam law, a marriage license is only issued to a couple of the opposite sex, he said.

R. Todd Thompson, an attorney for Pangelinan and Aguero, said the couple plans to take their case to federal court.

The U.S. District Court of Guam falls under the 9th U.S. Circuit Court of Appeals, which has ruled in favor of gay marriage. Thompson said he expects the Guam court to follow the appeals court’s decision.

Pangelinan and Aguero, both 28 years old, have been in a relationship for more than nine years. They are both registered foster parents.

Many same-sex couples on Guam have flown elsewhere, such as Hawaii and Washington state, to be married. Thompson said his clients wish to marry on Guam so their friends and family may attend their joyous occasion.

Of the five U.S. Pacific and Caribbean territories, only Puerto Rico has faced a lawsuit seeking marriage rights for gay and lesbian couples. A federal judge there — bucking the trend in federal courts on the mainland — rejected the suit.

That case was appealed to 1st U.S. Circuit Court of Appeals in Boston, but last month Puerto Rico’s Justice Department said it would not defend its laws banning gay marriage. Justice Secretary Cesar Miranda said that the government can no longer continue to discriminate against the gay community.